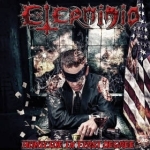 The Metal scene in Argentina is pretty much overlooked for years now, even though there were a lot of bands from that country since the days Metal was born. Yet none of these bands really rose to world wide attention. And after listening to the recently re-released first album of EXTERMINIO, I am not sure if this band from the area of Buenos Aires will be the band to change that. Originally released in 2007, “Homicide In First Degree“ is an album that wavers between more brutal Death Metal and not too rudimentary Grindcore. Accompanied by lyrical themes that obviously deal with anything inside the human body turned outside, I can’t help the feeling that EXTERMINIO want to be like ABORTED. And they are doing not bad. But sadly, ABORTED already exist for years and do a lot better than the Argentinian quintet. In addition, the vocals of Fernando Grippo sound like Chris Barnes who had a really bad day. In case you are searching for a band who fulfills all the demands mentioned, “Homicide In First Degree“ might be a fine idea for you. Visit: http://exterminio.bandcamp.com or www.facebook.com/pages/exterminio/46188565964. For additional information, visit the website of the parent label of Grindhouse music: www.metalmusic.at