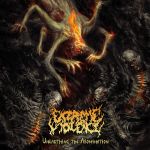 I’m not new to EXTREME VIOLENCE, a killer brutal Death Metal band from Greece. These guys recorded one of the best CANNIBAL CORPSE and SUFFOCATION like album in 2005 entitled “Ecstasy In Pain”. This album was released by the American label Sevared Records and it’s a great example of a very good and sick CANNIBAL CORPSE clone. Everything – sound production, song structures, drumming, vocals, concept, etc. – reminds both the legendary American bands mentioned above. Here we have a new release: a collection of EXTREME VIOLENCE’s early recordings, specifically: the “Addicted To Cannibalism” demo from 2000, the “Sickening Butchery” demo from 2002 and the “Ecstasy In Pain” demo from 2003. This CD collection is entitled “Unearthing The Abomination” and is released by Repulsive Echo. Although the sound is a bit rawer than on their first full length album, the result is the same: fast, sick and technical brutal Death Metal the way it should be played. The fastest parts are technical with a relentless blastbeats bombardment pretty reminiscent of Mike Smith from SUFFOCATION and the superb “Effigy Of The Forgotte” era. In the slow and mid tempo parts you can hear a very strong influence from the best CANNIBAL CORPSE albums: “Butchered At Birth”, “Tomb Of The Mutilated” and “The Bleeding”. The vocals are an ultra guttural mix of Chris Barnes and Frank Mullen. The album contains ten songs for almost 32 minutes, included a cover of the classic ‘Meat Hook Sodomy’. In conclusion this album is a good addiction to your collection if you’re a fan of American brutal Death Metal with a splattery and gory image. EXTREME VIOLENCE are very competent in this genre. More info at: www.facebook.com/extremeviolenceband, www.repulsiveecho.com