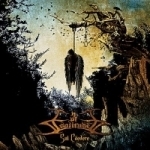 The opening minutes of "Sui Caedere", the second LP by England’s Doom / Death platoon EYE OF SOLITUDE, had me drawing comparisons to the Swedish band DRACONIAN (or DOOM:VS). That is, a mid-paced kind of mournful Doom / Death with a professional production. This impression was improved by the entrance of Daniel Neagoe’s low, guttural vocals, a definite strength for the band. We’re talking almost a Chris Barnes level of "Hrrffrr-grrfrrs". Nice. Then, patches of insane fast double-bass drumming added another fresh and generally atypical element to this style. Thankfully, unlike the aforementioned DRACONIAN, EYE OF SOLITUDE avoid a cliché that I generally detest in Doom / Death, female vocals. EYE OF SOLITUDE stick to the most important job of any Metal band: crafting riffs. "Sui Caedere" runs into problems mainly with its overabundance of samples and the lengthy running time. Don’t get me wrong, a well placed sample here or there can be used to great effect, there’s just a point where it gets excessive. As for the 70+ minute playing time, the record loses a bit of steam after the mid-point. Nonetheless, for all of their dedication, EYE OF SOLITUDE are definitely a band to keep an eye on (pun intended). www.facebook.com/eyeofsolitudeband, www.kaotoxin.com