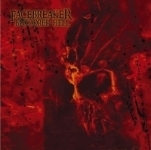 In case you always wondered whatever happened to Robert Karlsson, the guy who replaced Dan Swanö on vocals in EDGE OF SANITY, here’s your answer. Since the end of 2001 Karlsson is fronting a band called FACEBREAKER who finally got the opportunity to release their debut album through the Rage Of Achilles label. The eleven track assault „Bloodred Hell“, which got recorded at Black Lounge Studios in the summer of 2003 with producer Jonas Kjellgren (Centinex, Carnal Forge), opens up with the plain and simple spoken words „Welcome to hell…!“ and evolves into a true Swedish old school Death Metal inferno of highest quality! It’s probably because there’s not many bands of this kind left these days, but I really found it extremely refreshing to listen to the whole record over and over again. Especially because it turned out far better than what EDGE OF SANITY delivered while Karlsson was part of the band. Of course FACEBREAKER won’t re-invent the Swedish scene with their material and the label’s comparisons to early ENTOMBED, DISMEMBER, GRAVE and CARNAGE are a bit out of hand – BUT: the whole album at least convinces through great songs in the vein of older, heavier EDGE OF SANITY and the likes, which is more than fine with me! Another former EOS member, Andreas Axelsson, furthermore contributed lyrics to two of the tracks (‚Human Spoil’ and the album’s title track) and the cool looking sleeve design was done by Mick Kenney (www.mickkenney.tk), so feel free to check it out. All further info you may find at the following websites: www.facebreaker.com or  www.rageofachilles.com.