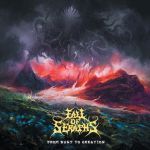 FALL OF SERAPHS
From Dust To Creation
(Memento Mori)
29:39min

FALL OF SERAPHS is a curious case of French Black / Death Metal. On one hand, the band leans on late ’80s / early ’90s approach of buzzing Death Metal and at the same time they sound a bit modern. I mean, is it the mix? Is it how it’s been put together? I don’t know. I quite enjoyed listening to this album, the vocals take precedence and the chaos of the music that accompanies the vocals are well written and performed. I particularly like the solo on track # 1 ‘The Eradication Dogma’, straight to the jugular with no hesitation. Although the band manages to invoke a sense of dark, brooding layers of atmosphere, the buzzing guitars seem to stay still, boxed within certain dimensions of sound and not moving beyond. Not necessarily a bad thing, but you want it to move ahead step by step and not meander around the borders all the time. I have no complaints, but I would’ve loved to see how the band would’ve elevated their current writing into something better by the end of the album. Otherwise FALL OF SERAPHS produce a dominant record for 2022 that many would love to play in their cars and living rooms. I for one would love to see them live, the aggression and the attack is best experienced in a live setting! For more information, please visit: www.facebook.com/fallofseraphsofficial, www.facebook.com/memento.mori.label