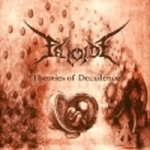 I have to say this is a damn exciting week! As the days trickle down to All Hallows, the undead spirits of Death Metal’s past must be smiling upon me. As I am receiving some killer fuckin’ old style bands in the mail! Like today’s gem – France’s FALOIDE. Not sure of the name, mayhaps it means keloid? An abnormal proliferation of scar tissue, left over from a surgical incision? I really have no idea. Yet what I do know is this act from Le Quesnoy, is just as brutal, and just as daring in the ways of utilizing early ’90s American Death Metal as their fellow countrymen BLOODY SIGN. Hot on the boot heels of MORBID ANGEL (when they were good!), OBITUARY, and one time Tri-State area natives INCANTATION. FALOIDE take their brand of heavy Death Metal to the scorching end of the spectrum, leaving a painful and blistering path of destruction in their wake. I tell you had this band formed in the day and this EP been released on like Thrash Records, Gore Records or similar, and pressed on virgin black wax. The EP would have been a hot collectible then as it would of have been in these times. Featuring 7 songs of crushing brutality. If only LOUDBLAST or MERCYLESS could share the stage with you lot in these days. What a show that would be! LOUDBLAST / MERCYLESS / BLOODY SIGN / FALOIDE!! Agghhhhhhhhh! Contact: Thomas Dorleans, 4 rue J-B Lebas, 59530 Le Quesnoy, FRANCE or www.Faloide.new.fr or www.myspace.com/faloide