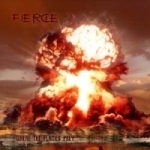 Instead of the sad attempt at Metal that MEGADETH is trying to fool us with these days, or outright shit acts like TRIVIUM, or SHADOWSFALL that Roadrunner Records is trying relentlessly to funnel down our throats here in the States (and around the Earth!) as the next Thrash Metal wave. How about instead giving this Finnish act a shot? FIERCE reminds me of the Thrash / Speed that was circulating round in the mid ’90s from the East Coast, bands such as SILENCE, Maryland’s CHEMIKILL or Delaware’s SOLITUDE. Take that reference, add with you the best of those elements and inject an almost identical live guitar sound to that of DEFLESHED and you have one of the better Metal units ripping out of Helsinki. My only complaint with this sophomore demo is the fact the vocals are wayyy too low in the mix. I hope you will fix this next time as the five songs that appear on this CD are well crafted, well played and worthy of a better vocal presence. Contact: Jani Hentila, Valimotie 21 B 3, 00380 Helsinki Finland or fierce@fiercemetal.org or www.fiercemetal.org