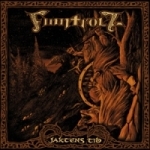 While permanently striving for originality some bands are quite obviously crossing the border of ridiculousness. And you know what? Finnish FINTROLL is one of them. This six piece from Helsinki is musically nothing but a mainstream orientated Black / Viking ( / Troll?!) Metal act, meaning you get the typical raw / screamy type vocal performance, nice memorable guitar melody lines combined with upfront keyboards and the necessary dose of aggression / heaviness. In other words, stuff that DIMMU BORGIR and the likes already recorded and released several times before these guys got together. The main difference between FINNTROLL and all those other bands is the fact that their basic material was enriched (?!) with Polka (!!) melodies / rhythms, which are giving the whole record an annoying and very happy folkloric approach. Unique? Yes, without a doubt! But it’s completely getting on my nerves nevertheless! I mean, do you really want a brutal record to come across like a gathering of drunken singing sailors in a small pub?! I doubt it. But that’s exactly how some parts on “Jaktens Tid” sound like… To remain fair – the band consists of very skilled musicians (members of THY SERPENT, BARATHRUM, MOONSORROW etc.), they are blessed with a big sounding production and incorporate elements that no other band has come up with before them. All that already resulted in a chart entry on #20 in their native country… So, FINNTROLL are quite obviously bound to appeal to a mainstream crowd, but not necessarily of interest for traditional Metalheads who prefer their music raw, brutal and aggressive.