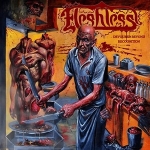 The long running Czech Death Metal machine FLESHLESS is now ready with their 8th full length massacre, entitled "Devoured Beyond Recogniton". It has never been a band that has hit me right on spot, though they’ve done some good things during the years. After the yawning intro, the party kicks off with ‘Dead Never Dies’, a great uptempo tune with some decent riffing and rhythm patters and a great growl. The effects on the growl this time around remind of some great Swedish gods, and that actually lifts the overall impressions of the impact. Musically the band has developed quite a lot as well, and the music hits harder, than I remember the albums did in the past. The band has matured quite a lot since I’ve last given them some spins, the songwriting is solid, and the progression throughout the album is thought through, there is a great flow to the songs and the variation is quite present. It is not like there is something original over this album, or something that will revolutionize Death Metal, though a solid output with some good tunes and moments, well made Death Metal with a suckerpunching production that pushes the music further. Though please leave those intros and outros be, they drain my sanity, or the bits and pieces of it, that’s left. More info at: www.facebook.com/pages/fleshless-official/320589007961874, www.metalage.sk