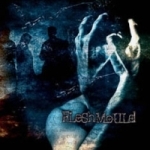 The fourth release by the Belgian Death Metal outfit FLESHMOULD belongs to those outputs that are dispensable, except you consider yourself a Death Metal lunatic who collects all and everything within this genre. Musically tending more to the American Death Metal style, FLESHMOULD perform their songs technically well done and the production is on an accurate level. All typical Death Metal ingredients are there, namely deep grunting, a lot of high speed and double bass drumming and classical Death Metal riffing. But it takes more to release a good album. After the short 50min the feeble point is most evident. The song-writing lacks of inspiration and it is obvious that FLESHMOULD just do not have enough ideas to fill the playing-time. Some parts, especially the fast played are pretty nice to listen to, but that is all. The promo-sheet speaks of several influences that are featured, but there are no such influences. Instead, from my point of view, FLESHMOULD try to play traditional Death Metal without any other influence. But be that as it may, compared to other Death Metal releases this album is just second-range. Considering the fact that “The Lazarus Breed” is their fourth album and the band is active for at least six years by now, I have expected a bit more than this mediocre album. For the future they may concentrate on the fast parts of their songs and take a mini album or 7″ in consideration instead of a full-length album. www.fleshmould.com.