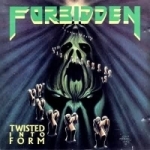 This second album from this quintet from San Francisco was expected with a lot of anxiety by the fans and media. Their debut album "Forbidden Evil" was a magnificent debut, albeit with very few minor details, but with a very promising future ahead. By this time, lots of live presentations, a live MLP (which was quite strange for such a young band) and some advance recordings were foretellers of great things to come. At first I was really disappointed by the cover art. I mean, after releasing one of the best Metal covers of all time, you were expecting something along the same lines. But no, the cover art was disappointing, and now to be honest, after many years, I can appreciate the meaning behind it, it is just that the execution is not up to what the band really deserved. Back in the day, most of the Thrash bands have some of the simplest logos you could ever imagine, so it was almost mandatory to have a decent cover art. Ok, enough with the cover art. Let’s go to the music. Once the accoustic intro goes, the powerful, rich and full guitar sound productions sets in. This is a vast improvement over an already good production. The guitars sound way too thick to be true. At that time, this kind of sound – which later on becomes a sort of norm -, was not too easy to achieve. It is a pleasure to find that the band went in almost the evolution stage that everybody was expecting; keeping their primal sound intact, yet revealing a more mature musicianship, with fewer "experimental" rhythm changes sometimes found in their debut and just sticking to a straight forward attack. In fact in this album, the general tempo is higher, faster than the debut. While not all the songs are just fast thrashers, they keep the intensity level up, even at the more mid-paced songs. Russ Anderson’s vocals have developed in such a great way; he becomes now a vital part of the FORBIDDEN sound. He has the ability to sing, no doubt, but he also has the ability to go through songs in almost a spoken way, but injecting it with some subtle melody and aggression at the same time, up to the point you don’t differ him from singing or just speaking words with venom, but fitting with deadly precision all the time. Both guitar players Craig Locicero and Tim Calvert, have achieved a fantastic way of creating riffs after riffs without sounding boring, creating solos in a great way without sounding too pretentious. And there is a powerful rhythmic section to spice things up. Well, here I find my first, let’s say "complain". The drumming on this album is very precise, yet…I don’t know, it just sounds way too simple for its own good. After listening to it on repeated occasions now I realize that it is a fault in the mix, as the cymbals are barely audible here, and that takes away some power of the drummer. I mean, there is a reason why Paul Bostaph went on later to play with SLAYER, but due to that omission on the mix, you could hardly guess he was such a talented drummer. Oh, well. What the band created here is without doubt the best Thrash / Speed Metal album of what is called the second wave of Thrash Metal (among other bands were DEATH ANGEL, VIO-LENCE, TESTAMENT and so on). You see, it was easy to make a difference between the Thrash Metal of the US of A (more complex, with the use of more melodic vocals) rather than the European one (which most of the time was rawer, with more growled vocals). My second and last "complain" is that I feel that ‘Step By Step’ and ‘Tossed Away’ are not as strong (probably a b it more "commercial" orientated) compared to such skull-crushing hymns like the opener ‘Infinite’, the fast ‘R.I.P.’, the sinister ‘Twisted Into Form’ and the decadent ‘One Foot In Hell’, which although all of them in the melodic line of Metal, keeps deep inside a dark dreadful sound few bands can create without sounding like a joke. Gone are most comparisons with many other bands, if probably they follow a similar path bands like METALLICA did in "Master Of Puppets" (I kind of sense a similar "vibe" if you ask me). At that time, Speed Metal bands were crowning their career at their third album… you know "Reign In Blood", "Among The Living", "Agent Orange"… but history proved wrong in here. What happened after this effort goes beyond me… bad management, personal differences, label things, whatever… FORBIDDEN was never again the same, no matter how they tried. Such a shame, as I know that they were capable at least another masterpiece of Speed / Thrash Metal…. but no, they were not able to do so. I now realize that this album was their top moment, and it was supposed to be like that, they didn’t want to keep it for their third strike… and for that I am thankful. Now, for the newer generations, go and grab this one, which has been re-mastered (which is in fact not that different sound from the original one) with a 20 page booklet and a new layout, and includes a collector’s transparent o-card that seperates the logo, album title and part of the artwork from the actual album art and the aforementioned MLP "Raw Evil – Live At The Dynamo" as bonus. Learn why this one, is a milestone in the history of Metal. www.centurymedia.com