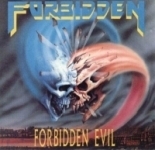 The second wave of American Thrash Metal. Back in 1988, some of the milestones of this music style have been released a couple of years ago…and although there were more Thrash Metal bands than the “big four”, many newcomers were pressing really hard. Among those was the young band from San Francisco FORBIDDEN EVIL. With some demo tapes going around and many live presentations, they gained the attention of the once mighty Metal label Combat Records. They just shortened their name to FORBIDDEN and used their previous name as the title for their debut album. Back in the day, a very important part of any band was the cover art. In fact, many Metal heads back then, in lack of any Internet, were driven to buy an album for the cover art mainly. Yes, it does sound weird, but believe me, many times it did wonders…so, here we are with want I consider one of the best cover arts for Heavy Metal ever…two flying skulls crashing in mid air, one red, the other blue, with the red one resembling more a demos skull than anything else…so, I thought, will the music be in the same league as the magnificent Kent Mathieu’s cover? FORBIDDEN style is a mixed balance between Speed Metal, which is encompassed by fast guitar riffs, and pounding Thrash Metal tones, were a more pounding rhythmic section was setting the path. Of course, their traditional Heavy Metal roots and also some Punk / Hardcore sound are found in there. Do not get confused: all Thrash Metal is founded on the speed and aggression of early Punk / Hardcore bands. The opening act ‘Chalice of Blood’ starts in dynamic mid-tempo with some weird arrangements, and showcases a very prominent duo of guitar players and the very good melodic voice of Russ Anderson. His vocal tone is melodic, yes, but he also takes a lot of semi-spoken passages still sounding good and adding a bit of raspy voice sounding to me a bit to “Zetrodus” Souza only Russ is a much better vocalist, with a touch of Lemmy. ‘Off The Edge’ goes into a faster thrashier affair, yet they still fall a bit short in creating memorable riffs. But things start turning into a different beast when songs like ‘Through Eyes Of Glass’ and ‘Forbidden Evil’ sets in, showcasing a band searching for its own style, with some really catchy-melodic yet heavy hooks. From then on, it is a deadly ‘March Into Fire’. It seems that they wanted to give a short break by adding a more mid-tempo song like ‘Feel No Pain’ to then return again into a more active mode in ‘As Good As Dead’ and closing the album with the macabre sounding ‘Follow Me’, with a main riff that invokes like a funeral chant. The production on this recording is very good, taking in count that it was a debut album, but what was more interesting was the fact that although they might have some similar sound (TESTAMENT being probably the closest in sound) the band was developing their own style. Another thing is the fact that few bands, and especially younger ones, were capable of reuniting musicians of a very high calibre, yet no one tries to go over the other. Although I would not say this was the best debut album from the second wave of American Thrash (in my eyes, that goes to VIO-LENCE, me the speed freak) it is still one of the best releases from that era, and nowadays it can be remembered as what a young band formed of very gifted musicians is capable of doing. Still, up to this day, I sense the same: with the momentum this album is going to give them, they were on the verge of creating something that will surely surpass many of their early brethren. And I know I was right. This re-release, comes in a deluxe presentation, with the awesome cover art, and the logo presented on a transparent card, with all the lyrics (missing in the original edition) in a 24 page booklet and 4 live bonus songs tracks (‘Feel No Pain’, ‘As Good As Dead’, ‘Through Eyes Of Glass’ and ‘Chalice Of Blood’ –  from a show in Philadelphia, October 23rd, 1988) taken form their video performance of the “Ultimate Revenge II”. This is more than a reason to buy this one for a second time. www.centurymedia.com