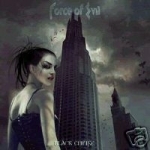 While their debut album had been an enjoyable effort but definitively not the totally killer recording one could expect (considering the musicians involved) round two definitively proves that the once talented songwriter team known as Sherman / Denner is kinda washed these days despite all the comments made by Mr. Sherman such as “It’s our heaviest album so far!” etc… No way! There’s a few very enjoyable Power Metal numbers (oh yeah, when I use Power Metal, it’s in the REAL sense of the term which was used back in 1983 to describe acts such as OVERKILL, JAG PANZER… nothing in common with the bands that the term is associated with nowadays!) such as the title track (a moderately fast paced heavy and catchy number), ‘Death Comes Crawling’ (a slow heavy track which could have sounded way better without Martin Steene miserable vocals), ‘Dead In Texas’ (a slow menacing number with a cool mid paced chorus) but there’s more totally boring stuff as well, some being totally awful ‘Days Of Damien’ (check out those awful drum beats!), the miserable semi downtuned numbers ‘Disciples Of The King’ and ‘Beyond The Gates’… well a huge lack of ripping riffs and intensity plagues this recording. And don’t come to me saying that it’s just a matter of tastes, this can just be considered as plain weak for every self respected Metaller! I guess the majestic days of MERCYFUL FATE / ZOSER MEZ are definitively over this time.