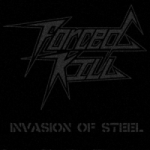 You want it fast and furious? You want it totally frenzied and old school? Then you should not look any further… FORCED KILL, this young and relentless quintet coming from the middle part of Finland, Jyväskylä, has finally unleashed their 2nd Thrash-goodie – a 4-track demo titled "Invasion Of Steel". FORCED KILL’s high-octane, old school Thrash Metal begs no mercy but comes like a revengeful tornado toward you, wrecking everything on its way by four new songs they have recorded for this excellent demo – and truly strengthening FORCED KILL´s position in the Finnish underground Thrash Metal scene as one of the most important and essential, new acts. For what this is, ultimately FORCED KILL’s own Thrash approach comes very darn close to all that what the 80s Thrash Metal was all about – when such names as the Canadian SACRIFICE, VIO-LENCE from the Bay Area, CA and let’s say, even Finland’s legendary Thrash heroes NECROMANCER, were loading their weapons for the very first time, for a massive global slaughtering. All viciousness and ferociousness that FORCED KILL have managed to squeeze into all these four new Thrash cuts on the "Invasion Of Steel" demo, are just amazing. The productional values here also do remind me of how the underground scene was back in the 80s. It was not that important to get the fanciest sound or most superior quality production for your songs but most importantly, make sure that once you heard some band for the first time, it was not your last time by any means when you heard them. Remember, the first strike was supposed to be the deadliest one – and that was definitely something every band with some brains, was striving for more or less – and FORCED KILL have successfully followed that golden rule since the day the band was formed. "Invasion Of Steel" will undoubtedly cause even more serious fuss around them – and whether they get signed or not by this absolutely enjoyable, old school-ish Thrash demo, I cannot say like it does not matter to me at all because it does. It would be more than a screaming crime if they did not get snapped up by some label soon. The sooner – the better, naturally. FORCED KILL are one of those few Thrash Metal bands out there nowadays that truly know what it takes to capture the 80s feeling and vibe the right way. If you don’t believe me, well, consider it as your own privileged headache then – and please f**k off and die by the sword. www.myspace.com/forcedkill