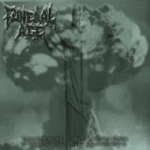 Cannot quite believe it’s been 13 years since this goodie came out: "Fistful Of Christ", this 7-track debut record from these Seattle based icon-smashers and blasphemers FUNERAL AGE, worked as a good road sign for what was to come from this vicious sounding bunch about 7 years later (which was the band’s follow-up album, titled "Thy Martyrdom Come" in case you were wondering). Recorded as a 3-piece band, "Fistful Of Christ", blends intellectually some vital elements from Death, Thrash and Black Metal, sort of doing their style into the vein of early sound of Swedish DISSECTION, in which melodies do play a very important role within the music. Compared to the band’s follow-up record, "Thy Martyrdom Come", FUNERAL AGE’s debut is slightly rawer and more old school-ish effort, having more sheer testosterone-oozing power squeezed into the songs – and overall attacking on our faces a bit more shamelessly and ruthlessly than the songs on their brilliant, more refined sounding 2nd album. Vocalist and guitarist Kevin Bedra reminds me quite much of David Vincent of MORBID ANGEL or Peter Wiwczarek of VADER at times indeed, if you need your obligatory throat comparisons. It’s a true pity that the guys of FUNERAL AGE had to self-release this album on their own back in the day because the album would have needed some label’s support behind it – just to get it circulated around the world a bit better and make the band more known among the extreme Metal fans. Well, to support this very potential and promising US extreme Metal act FUNERAL AGE, here’s your chance to order a copy of this kick-ass record straight from the band. Go to: www.funeralage.com