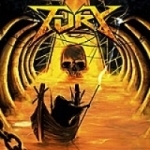 I ripped the package open… took the CD out from it, picked up my old Walkman and went to the balcony of my home sweet home. The sun was shining – and decided to take some tan while listening to some – hopefully tasteful music. After spinning the disc like 30-something seconds, I was suspicious whether there’s a male or female doing the vox on the disc I was listening to. Had to read more info about the vocalist by checking the CD sleeve out – and saw the name Julian Jenkins for being responsible for vocals and 2nd guitar. Even after this I wasn’t 100% certain whether Julian is a male or female name. Gladly there was also a whole band picture on the inner sleeve of the disc – and voila: Julian is a bearded male, wearing on an IRON MAIDEN t-shirt in that aforementioned group shot taken from the whole band (no offense though). FURY, this 4-piece Heavy / Thrash Metal combo hails from Worchester, U.K., and they have released 2 EPs so far, off which their debut 2011 EP includes 5 songs in it. They blend of both Heavy Metal and Thrash Metal pretty seamlessly that also has a nice NWOBHM twist to it too, making things a bit more favorable for them indeed. They also keep things relatively simple and straightforward but the way they keep the fire burning through their stuff, one can tell right way we have definitely got something on here. The use of catchy melodies – as well as hard-hitting waves of riffs find their tiny privileged positions within the song structures – and sort of culminating in a song called ‘Eyes Of The Dead’, which sounds a lot like the guys have found their ultimate hit song that is urged from them to play live as a final encore. It rolls over its listeners like a menacing thunder, leaving people to beg for more. Especially the intense riffing and overly catchy chorus part in this tune make you hooked. Brilliant song, I would say. As a more negative note though, I am totally sincere by saying this but I think Julian’s vocals are too fragile and soft sounding, and would need some power and roughness to them. Then again, you gotta remember opinions are like buttholes: everyone’s got one and some of them stink worse than others. Oh well, just go to check them out now at: www.furyofficial.com