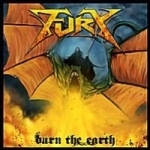 A new 4-track EP called "Burn The Earth" from UK’s Heavy / Thrash Metal newcomer FURY is here – and basically it continues from the same musical footsteps where they left off on their 5-track self-titled EP in 2011. Again, FURY count on a relatively straightforward and Thrash-infested Heavy Metal approach on their follow-up EP, but only this time they have pushed more pedal to the metal, so to speak. The songs on "Burn The Earth" are only not teeny-weeny more aggressive and in-yer-face sounding but also have more hooks – and most importantly have this nice tendency to reach one’s ears somewhat a little bit easier than what the songs did on their already promising debut EP. Both vocalist and guitarist Julien and guitarist Joel churn out kick-ass riffs one after another while Martin on bass and Alasdair on drums, give their best backfire for their fellow band members. Also, I criticized vocalist Julian a bit last time for lacking some power in his voice but on "Burn The Earth" he has found more balls and overall more masculine type of signing style into his vocalism. Don’t know what has happened in between their 2 EPs but I must say I like his vocal style a whole lot better on "Burn The Earth". As for the songs, the last ‘Life Eternal’ is probably my favorite song out of these 4 songs on the EP; overall a very catchy number with some good and aggressive riffs, cool chorus part, etc. in it. It’s also the most Thrash-orientated song on this release – and being a huge Thrash fan that I have always been, it’s actually no wonder why this song appeals me most. Again, good stuff from FURY on here. Up next I am looking forward to hearing a full-length record from them, which will hopefully blow both of their 2 EPs out of the water. Well, that remains to be seen… Go to www.facebook.com/furyofficial