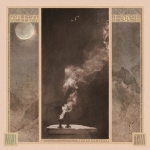 The first time I read about FYRNASK was in Golgotha ‘zine – an immensely awesome ‘zine that I urge everyone to check out! "Fórn" is the third album by this German one man project, after "Bluostar" in 2011 and "Eldir Nótt" in 2013. I’ve heard bits and pieces here and there, but never a full album so far. The boring info out of the way, I sit back in my old man lounge chair with my headphones on, I press play and… magic happens. It hardly ever happens that an intro manages to capture my attention – let alone an almost 5 minute ambient piece of an intro. But the opener here, ‘Forbaenier’, sets the mood for things to come: it’s equally majestic as it is eerie, as evil as it is uplifting, and as archaic as it is modern. "Fórn" takes the listener on a journey and Lord Lucifer knows it’s been a while since a record did this to me ("Thier" by AMESTIGON might have been the last record I can think of that put me in a comparable meditative state, at least in this genre). While FYRNASK sound nothing like NEUROSIS, the effects on the listener were cut from the same tree: this album ebbs and flows, it’s calm and loud, raging and violent and seductively soothing; crossing genre boundaries without being overly "experimental“. Black Metal in general always put a lot of emphasis on atmosphere, but only too often is this just a cheap excuse for lousy musicianship and crappy production. The atmosphere on "Fórn" is overwhelming in the best sense of the word. Listening to this piece of art (and yes, it IS art in every sense, from the sounds to the visuals) is like listening to the soundtrack of a non-existing movie: it enhances the experience. Again, neither band I am mentioning now sounds quite like FYRNASK, but ULVER did the same thing to me, as did MURMUÜRE, as did WOLVES IN THE THRONE ROOM. All of them Black Metal based, but not really traditional, religious, Satanic Black Metal. The occult and mysterious atmosphere (again!) is there, it’s almost tangible, like spectres in an empty room at night. Above all, "Fórn" sounds amazing. The production is simply incredible: each and every instrument and note is right where it belongs, almost mathematically calculated, and it sounds as organic and warm as a crackling fire on a winter’s night. When I grew up and started buying records on my own, I always listened to the full thing. First side A, then side B, carefully looking at every detail in the artwork, reading the lyrics… and while those times seem to be gone like MAYHEM’s integrity, this record here takes me back and makes me do those things all over again. And after the final notes of ‘Havets Kjele’, the listening ritual is over, the curtain opens again like after a midnight feature in a dark movie theatre, and I can walk away a man with more wisdom than I used to have before. "Fórn" has enrichened my life. It really is THAT amazing. More info at:  www.facebook.com/pages/fyrnask/114847128596890, http://fyrnask.bandcamp.com, www.van-records.de