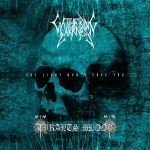 Long time since I have seen a split recording. Usually to do this kind of projects, the bands involved must have something in common so the flow of the music although with different bands and sounds, keeps some sort of connection. Spain’s GATHERING DARKNESS who starts the onslaught with 5 songs are in the brutal Death Metal style, although they do show some finesse in their compositions, so references to bands like NILE, more recent CANNIBAL CORPSE and some SUFFOCATION and touches of old UNLEASHED can be called. Their lyrical approach is that of apocalyptic visions, the production is heavy enough and the compositions are well done to keep those into brutal Death Metal banging their heads to this demonic evil style. Maybe only the very low guttural vocals could benefit from some variety, but overall it is an interesting band which can conjure darkness in their songs. TYRANTS BLOOD on the other hand comes from Canada, and some of the members do have a quite impressive background having performed in heavy weights like INFERNÄL MÄJESTY, BLASPHEMY and THOR. Their music is more in the Death / Thrash vein with a few old school Black Metal touches. Inspired by SLAYER, POSSESSED and BATHORY with some Grindcore touches, the 4 songs presented here are quite chaotic, and maybe the production values could be better to make it sound heavier, as sometimes it becomes too chaotic to figure out what the band is doing. But even with that, it also gives them that bestial touch that Canadian bands are known for. The last song on here ‘Conjure The Watcher’ for some reason reminded me of some of the recent material from CANNIBAL CORPSE. A quite good split from two bands that share the obscurity of evil Death Metal in their black hearts. http://gatheringdarkness.bandcamp.com, www.facebook.com/tyrantsblood, www.hecatomberecords.es