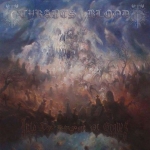 TYRANTS BLOOD
Into The Kingdom Of Graves
(Tridroid Records)
45:12min

Once in a while one just have to surrender when a new record hits the stereo. I was kind of skeptical when this album was being presented as the band of ex – BLASPHEMY guitarist Marco Banco (The Traditional Sodomizer of the Goddess of Perversity), and I am pretty sure I had my hands on the band’s second album "Crushing Onward Into Oblivion" which was released by Invictus Productions back in 2010, though I can’t say that I remember anything about the music on it, another thing that made me dread pushing play. The band released the CD version of this album themselves earlier this year, and now Tridroid Records is ready with the vinyl version of it. Though as soon as the music started I was blown away by the immense brutality and intense outlash. This is the typical Canadian mix of Death, Thrash and Black Metal loaded with aggression, I don’t how they can turn out so many bands and albums displaying such angry music, that hits an inner nerve most of the times, there must be something in the water over there. The guitar riffs are crushing, so crushing and brutal, and gripping, ripping away in a mad frenzy, with some good and hooking, though still quite brutal melodies, the drummer is a madman and controls the pace relentlessly, there isn’t a dull moment from the rhythm section, that delivers an energetic and quite impressive performance. The vocals are guttural and evil, a hateful spit of brutality in our faces. It is all drenched in a dark, raw and brutal production, that leaves room for the instruments, almost all the time, even though it muds a bit when it becomes overly intense, and damn I love the ‘open’ and aggressive sound of the snare drum. And just take the ending of the last track, the title track which is 30 seconds of grinding drums and guitars shredding away in a monotone frenzy, this album is mad and the sound track of my winter. Brutal, relentless, straight in my face, though still quite technical and over the top, and it is quite hard to escape the thick and hateful atmosphere that drenches the record, a damned nice surprise! More information at: www.facebook.com/tyrantsblood, www.tyrantsblood.com, http://tridroid.bandcamp.com