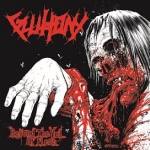 GLUTTONY
Beyond The Veil Of Flesh
(Vic Records)
29:40min

Every time I have been listening to this output I felt sad and depressed afterwards. Because I wanted the music to go on forever, therefore I am glad someone invented the endless repeat function. The debut by Swedish based GLUTTONY is classical Swedish Death Metal. No more, no less. The band name, the excellent cover artwork and the song-titles which leave nothing to be desired. ‘The Revenant’, ‘Beyond The Veil Of Flesh’, ‘Eaten Alive’, ‘Raise The Dead’, ‘Coffinborn’, ‘Post Mortem Decapitation’, ‘And Then You Rot’, ‘On The Slab’. The songs, up-tempo or mid-tempo, sometimes with a fine blend of melodies. Just unmistakable and simple but true Swedish Death Metal. The vocals, imagine some kind of mixture between Matti Kärki and Martin van Drunen. The production, I guess the musicians (former or still active in DEMONICAL, REGURGITATE, DIABOLICAL(SWE) and SETHERIAL) could have sounded like METALLICA if they wanted to. But the sonic impact of “Beyond The Veil Of Flesh” is exactly the way it should be. Raw and brutal without being just blurred. The man responsible for mixing and mastering is a person you might have taken notice of… a guy named Dan Swanö. OK, just kidding. If you do not know Dan Swanö then better stop reading, although I can not imagine anyone visiting the VOICES website without knowing Dan Swanö. Even the former releases are done in a classical way. First the “Coffinborn” demo in 2012, one year later the “Eaten Alive” EP and now the full-length debut. If all bands would stick to that order a lot of premature releases would be spared. www.gluttony.se, www.facebook.com/gluttonyswe, www.vicrecords.com