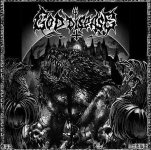 Few countries can be proud of their own Death Metal scene like Finland. Also a chief of state like Barack Obama has confirmed it! If you have attended the Finnish Death Metal Maniacs Festival you have another proof of what I’m saying. In fact, during the last years, many young bands followed the steps of old seminal bands like CONVULSE, AMORPHIS, DEMIGOD, ADRAMELECH and so on. Among these followers here we have this act from Helsinki called GOD DISEASE. Since 2013 (even if they started in 2010 and disbanded in 2012, then they reformed in 2013 with a new line-up) they produced one demo and two EPs, collected on this compilation CD with which the new French label South From Here Records began his activity. "Doom Howler" is the more recent stuff and it is the first half of the whole record. The first track, the title-track, is a good example of their songwriting: a slow first part with melodic guitar licks, a bass break before the fast part with a guitar solo, then the end of song with again the first slow riff. The second track, ‘Maggots’, is structured in a simple way too, but it starts and finishes on the same fast beat. ‘Necromancer’ sounds very melodic with a persistent arpeggio for the whole song. ‘Only Death Is Real’, a very famous slogan in the scene and the title of the fourth track is enough for me to say that these guys need to refresh their ideas. They also close the EP with ‘Supposed To Rot’ by ENTOMBED. The main problem to cover a classic like that, is that you have to compare it with the original, and the difference is truly considerable. Some years ago NECROWRETCH and ENTRAPMENT covered the same song but they did it with stronger personality. ‘Abyss Cathedral’, the oldest half of the CD, starts with ‘Sepulchral Swamp’. Here we have a rawer and darker sound, but in my opinion it is not really different to "Doom Howler". It’s useless to describe the rest of the song, the level is still the same, the songwriting is just sufficient and repetitive and they don’t stand out for an impressive instrumental skill. GOD DISEASE have assimilated the ABC of the Finnish Death Metal but they are not competitive yet with the leaders beforehand quoted or with younger bands like DESOLATE SHRINE, GOREPHILIA, CORPSESSED, DESECRESY, DECAYING or SOLOTHUS. Anyway, they have surely room for improvement. So follow them at www.facebook.com/pages/god-disease/118690564980083 and check out their label as well at www.south-from-here-records.com