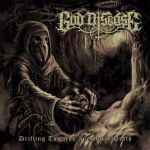 F.D.A. Records just keep signing some of the most solid Death Metal bands around these days that are churning out some brutality. The label, as I have previously mentioned in my reviews of other bands on the label, is truly one of the labels out there working on leading the way and taking no prisoners. Which takes us to Finland’s GOD DISEASE with their debut full length album “Drifting Towards Inevitable Death”. This is my first time listening to these guys but I did do some quick research to get a bit of background on them. The five-piece band had a line-up change early on but have been releasing demos / EPs for the better part of 6 years but now we get an entire album worth of some sickness. The following jams are what really stood out for me in one way or another. Leading the charge is the track ‘Descending Into Abyss’, slow downtrodden and catchy are the best ways I can describe this track. I get a hint of GRAVE MIASMA and old INCANTATION on some of the sound / atmosphere. The next track is ‘At The Pillars Of Kadatheron’ and this one stood out as one of my favorites based on how guitars carried several interesting hooks with vocals spewing forth some gravel… overall a good mixture. ‘King Of Maggot Crawling Flesh’ is another track that really stood out. It starts up with speed up guitars, a backing keyboard that provides a funeral ambiance, but bounces back in tempo from between a mid paced beat back to slowing things down. ‘Cathedral Gates’ is my favorite on this album as it captures all the elements the band has, combines them, and showcases their talent in songwriting. From start to Finnish (wakka wakka) the band has brought forth a solid debut album. GOD DISEASE clearly show what they bring to the table and hopefully this is only a glimpse into what is yet to come from these dudes. The slow churning riffs throughout the album bring the following that describe the band’s style: Dark, doomy and devastating. The production of the album is solid with crisp clarity on the instruments and the vocals. The album will be released in both digital and physical format, so make sure to grab a copy and jam out. For more info: www.facebook.com/goddisease, www.fda-records.com