At just under 11 minutes, "Covered In Skin" seems like it’s bigger on the inside than it is on the outside. It is an interesting lesson in the time continuum that keeps you both engaged and befuddled as to how much has happened within one song. Consistent with their other releases, the tracks are riddled with tempo changes, most of which are rather unpredictable and quite different from one another varying from the elaborate to the more simplified. Dissonant guitars start off the EP’s namesake track and lead into thunderous war drums before descending into a thrashy almost Crust inspired verse that showcases a chugging sprint before any blast beats are introduced. To log all of these tempo changes would be a laundry list of styles one after another sort of like how a panicked child tries to tell you everything that happened during recess. Each parts melts together and climaxes within its own bite-sized portion in such a way that you almost can’t remember the segment that preceded it. It is an amnesia that comes not just with natural transitions, but due to the force of each of its stages; these are auditory moments expanding and outgrowing themselves in a matter of seconds and shedding them one at a time. Perhaps I am reading too much into the namesake ‘Covered In Skin’ or perhaps the title is right on point. ‘Mindcreeper’ is also aptly named as it is a bit groovier and permissive for you to grab a hold of it and hang on for a while. It appears to be going for a more cohesive sound throughout offering more cyclical changes in tempo than the former track. Both songs are rather layered, however, creating a big sound that is never relegated to one genre or another. While there are definite Death Metal influences, it is not the extent of their sound and it is quite quizzical that 11 minutes of music can embody so many moods and aural experiences. There is definitely something to be said for their efficiency and physics-bending largeness. But don’t take my word for it, shave 11 minutes off of your rigorous youtube watching schedule and see for yourself. www.facebook.com/goregast, www.fda-records.com 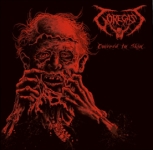 After 3 full-lengths, GOREGAST’S EP "Covered In Skin" includes 3 tracks and 14 minutes of brutal Death Metal in glorious unison with each other (it was originally released back in 2013 as a 2 track vinyl only 7" – Frank). Unlike some EPs that are simply throw-away songs just to get them out there to the public, GOREGAST have delivered a strong, yet brief, collection of Metal tracks that make me wish for a full album of equal quality. The first track ‘Covered In Sin’ begins with a steady build-up of guitars (Rico Krause and Steve Kleinert) and all-over-the-palace drumming (Max Pela) before breaking into a trampling, kickass, crunching monstrosity with throat-ripping vocals by Rico Unglaube. ‘Mindcreeper’ continues the brutality with chugging guitars. In an EP with limited space, GOREGAST waste no time with intros, experiments or overdone movie sampling. They get straight to the point and knock you on your ass. ‘Soulless’ rounds out the EP as GOREGAST cover GRAVE (the bonus track on this CD edition – Frank), and do a damn good job of it. For a band currently on hold, here’s to hoping they can get back in the studio to finish what they started. GOREGAST can easily fit into the Death Metal genre along with the best of them. For more information, check out www.facebook.com/goregast, www.fda-records.com