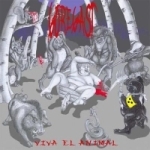 Imagine a fat guy in his underpants lying in a wheelbarrow – frightened, screaming. His arm is missing, he is bleeding. Angry animals surround him, a wild boar, a fox with a chainsaw, a rabbit raising an axe for a deadly stroke, a mole sharpening a knife and a fork, awaiting a nice piece of that fat dude, who’s missing arm is devoured by a squirrel sitting on a tree. All drawn in a funny, quiet childish comic way. Now add a scrawly red logo saying GOREGAST and a meaningful title like "Viva El Animal" and you know what cover surprised me early in the morning when I opened my mail a few days ago. Now turn the CD around and you see five crazy guys with slipknotish masks and a pair of sunglasses good old Magnum would have killed for. Now check out the songtitles: ‘Du Schmeckst’ (translated: you taste good), ‘Die Schoenste Blume’ (tr.: the most beautiful flower) and ‘Te Corto La Cabeza…Te…’ (tr.: well, I don’t know. Isn’t it enough to speak two languages!?) and you know these guys sing in German and Spanish. Now try to think of the soundtrack to all this and I’ll bet you are not too far away from Berlin’s GOREGAST’s sound. Raw, primitive, brutal and sometimes funny old school Death Metal with a huge Grindcore note to it, packed in a fat and clean, yet undergroundish production, deep guttural vocals and devilish screams. Not the band to listen to when some intellectual wine-drinking, Beethoven-loving soft-guy, wearing an armless pull-over made from sheep-wool with a polo-shirt from Lacoste underneath comes for a visit. But a good CD after some beer, with good old Metal-friends before you go over to the next Zombie movie. Original? Technical? Revolutionary? No way, its fun! SODOM meets MASSACRE meets SANITY’s DAWN meets BRUJERIA. Speaking off: track Nr. 12 finishes the album with a BRUJERIA coverversion of ‘Matando Gueros’. Entertaining. You can order the CD from the band’s website for not too much money: www.goregast.de. By the way: nothing against wine and Beethoven!