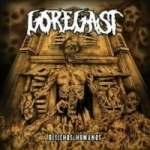 GOREGAST from Germany aren’t a novelty act, no way, they’ve been crafting their sick trade since 2005, but even before that, from 1993, as DISTRESS. Now I won’t go into full bio details and stuff, suffice to say that the guys know the difference between good, old fashioned Death / Grind and modern sounding "br00tal / slam" crap. "Desechos Humanos" ("Human Waste") is their 3rd album and what a fuckin’ scorcher it is!! Right from the first tight chords of the title track you’re hit with a rotten to the core, stinky mixture of Death Metal taking its cues and mutilating them from NIHILIST (Swe), AUTOPSY or PUNGENT STENCH and faster paced grind in the bloody vein of ALTARS OF GIALLO or MACHETAZO. Changing tempos from mid-paced to fast, GOREGAST drowns you in a sludge of this human waste, just listen to ‘Honor The Dead’ or ‘The Boozer’, it’s pure old school Death Metal classicks with twisted, highly pronounced vokillz!! Or take ‘Perco De Dinero’ where they don’t mind picking up the pace and grinding your old bones a little, but everything is done with permeated catchiness, it makes me wanna stomp around and smash shit up, kill my neighbours and lay the stupid fucking humans to… erm, waste! I can’t fuckin’ tell how much you need this album if you like golden riffs of good old Death Metal mixed up with catchy as fuck outbursts of prime class gorefied Grind! This is another discovery from F.D.A. Records for me this month and I salute them for it! Definitely top 10 album of the year! Now I just gotta go back and check out their previous two albums "Viva El Animal" and "La Revancha". Contact: www.myspace.com/goregast, www.fda-records.com