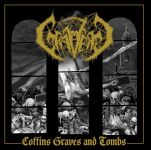 Hailing from Santiago, Chile, GRAVERED is one of the many Death Metal acts coming from this South American country. Strongly influenced by the late 80s / early 90s Swedish Death Metal scene (DISMEMBER, ENTOMBED, GRAVE, UNLEASHED), GRAVERED offers a 20 minutes EP consisting of four songs plus an intro and outro. This production was re-released on CD the current year by Iron, Blood And Death Corporation (this was released for the first time back in 2016 under Chile’s Apocalyptic Productions). The first thing you can notice hearing this is they sound like DISMEMBER (think about “Indecent And Obscene”). ‘Monolith Of Horror And Flesh’ is the first track after the intro here, and I’m not impressed. What follows is ‘Coffins Graves And Tombs’, and the formula is almost the same as the previous track: kicks off a slow riff, then add the drums, bass plus growls here and there. The rest of the EP is not so different. Don’t get me wrong: the music here is not bad, but this is not appealing to me in any way. GRAVERED’s particular approach to Death Metal sounds a bit formulaic and plain for my taste. This stuff could work in a good way for newcomers to the Death Metal world or conservative, nostalgic fans. If you are looking for new Chilean Death Metal, try acts like PHANTASMAGORE, EXANIMATVM, HORRIFYING, SUPPRESSION, UTTERTOMB or ALTERED PERCEPTION, to name a few. Find out more about GRAVERED at www.facebook.com/gravered.deathmetal. Label contact here: www.facebook.com/ibdc666