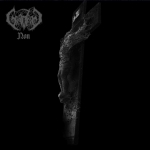 Beginning with ogrish tribal intonations over melodious gregorian chanting, the intro opens way to the horror stories contained within this EP, the second in GRAVERED’s history. Chilean Death Metal has the fame of being a strong scene, and these guys are surely not turning the quality down. ‘Non Cristo’, an utterly offensive antichristian tune, delivers intense Doom / Death Metal with extremely downtuned guitars and distortion that takes you back to the old times of the genre. The instruments are very aptly handled, and the production is just what the songs need. The vocals are also incredibly deep. The overall sound reminds me of ENTOMBED, DISMEMBER or, even more adequately, AUTOPSY, whose classic song ‘Ridden With Disease’ is presented in a brutal cover version (one of the two tracks sung in English instead of Spanish). Indeed, as far as playing truly old school Death and Black / Thrash goes, South America is a true Eldorado. And listen to those bass strings at the beginning of ‘Podrido’ (a song about a rotten Christ)… how loose can those things be?! Most of the time the music is on the slow side, but always very heavy and hostile. The final track (a re-recording of their 2015 demo) begins with those gregorian chants again above some background horror scene before going yet again into a story about a Christ that has fallen to the effects of putrefaction. A solid band and a fine release for any Deathster’s collection. Check them out at www.facebook.com/gravered.deathmetal, www.facebook.com/ibdc666