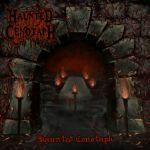 ASPHYX, AUTOPSY, CATHEDRAL and CIANIDE combinedly define everything about the genre Death / Doom Metal. Now, add the never old movement and passages of BLACK SABBATH and you will get the idea about what type of sound encapsulated in the self-titled EP of Polish Death / Doom act HAUNTED CENOTAPH, which was released in association with Fallen Temple at the very end of 2019. Their debut demo “Nightmares From Beyond” was nothing but sounds from the deepest and darkest corners of catacombs and established their deep connection with horror and the Cthulhu mythos. Now, they are back from the tomb with their morbid Doom / Death Metal of slow-paced riffs, some mid paced parts full of diversity in transition and movement, ghastly vocals and atmosphere of death and dismay. Featuring members of EXCIDIUM (Coffin Crawler – Cry From The Crypt: vocals, Golem – Hand Of Doom: guitar, Brewhammer – The Krusher: bass and Scholomance: drums), will give you some initial idea what force and spirit bonded these Polish maniacs together. And, later exposing into the five tracks ‘At The Gates Of R’lyeh’ (Intro), ‘Haunted Cenotaph’, ‘Into The Realm Of Thanatos’, ‘Rites Of The Undead’ and ‘March Of The Damned’ (Outro), will only leave you morbid, filthy and stinking like a doomed creature in an old grave. The simplistic and organic production, added further to its heavy and vicious atmosphere. This EP only lasts little over 25 minutes, but will possess your mind for far longer than you can imagine before a first spin. Michal “Neithan” Kielbasa, who is credited for the haunted instruments played (intro, outro, keyboards, zither) and the invoking album artwork envisioned by Magdalena Mnich, altogether are an experience of a totally haunted journey into a long-deserted cenotaph is absolutely certain. Recorded, mixed and mastered at Antisound Studio, also by Michal “Neithan” Kielbasa, unquestionably exerts his strong contribution on this record. The CD is too short, but that’s where lies the strength, which shall be experienced with many spins and with this, “Haunted Cenotaph” gives an enormous appetite for HAUNTED CENOTAPH’s next efforts. Explore more about the band at www.facebook.com/haunted-cenotaph-150906512232754 and visit their label page at www.fallentemple.pl.