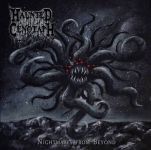 HAUNTED CENOTAPH are a rather new band from the South Eastern part of Poland, an area called Podkarpackie. Some of the guys also played or still play in other underground bands as well and started HAUNTED CENOTAPH in 2017. A year later, they entered the studio to record four originals and a cover tune and released it as a demo via Fallen Temple. This demo was called “Nightmares From Beyond” and should surely please anyone who loves the archaic old fashioned style of extreme Metal from the mid of the 1980s. Simple, yet effective guitar riffs meet a slow to mid tempo based beat that reminded me of the moments when SLAUGHTER or HELLHAMMER slowed down their pace to gain their full devastating force. Mix this with a good dose of present day Doom / Death Metal and you’ll have an approximate idea how HAUNTED CENOTAPH sound like. From the SLAUGHTER inspired opener ‘Sabbatical Vengeance’ on, HAUNTED CENOTAPH are not out to make prisoners or show mercy. Instead, they bring pure relish of Doom and devastation. Especially the creeping ‘Funeral Candles’ with its insidious hooks is a real killer tune. Yet both ‘Ritual Of Evocation’ and the title track are damn fine neck breakers as well. And as far as the cover tune chosen for “Nightmares From Beyond” is concerned, HAUNTED CENOTAPH proved a real great taste. No one less than the mighty HELLHAMMER were chosen, their old demo track ‘Reaper’ was very carefully adapted. And with this wise choice ends a demo (or EP, if you want) that whets the appetite for more. And this “more” is already out in form of a self-titled EP. But that’s a different review, I guess. Find out more about HAUNTED CENOTAPH at www.facebook.com/haunted-cenotaph-150906512232754 and visit their label www.fallentemple.pl