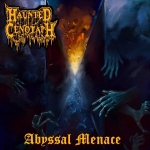 Founded in 2017 and after a demo tape in 2018 and an EP in 2019, Polish outfit HAUNTED CENOTAPH has released their debut album, “Abbysal Menace”. Sincerely I was expecting some overproduced Death / Black Metal, since a lot of Polish bands have been following BEHEMOTH’s example for the last decade or so. Luckily, this is not the case with “Abbysal Menace”. HAUNTED CENOTAPH has taken a totally different path and that instantly made me put a lot of attention to this album. These guys play really dense Death / Doom Metal, which seldomly speeds up. The key here is that they have really good song structuring, some great riffs and even a slow, creeping groove. So, this is a perfect example of a heavy album with an overwhelming atmosphere. And they have managed to do so without the aid of keyboards, female vocals, etc. The production fits their style perfectly. Organic, heavy, a bit raw with enough bite and snarl, which is the obvious choice since HAUNTED CENOTAPH dwells into that 90s Scandinavian sound right before the NWOSDM hit. Something between TREBLINKA, MORBID and ETERNAL DARKNESS. A well balanced mix and a superb mastering rounds up the whole package. Coffin Crawler’s (sic) vocals vary between a deep growl and a mid pitched scream, which he uses to emphasize different parts. I really like that variation as means to an end, so the songs remain dynamic and avoid the “never ending growl” that plagues a lot of Doom / Death Metal bands, in my humble opinion. Jakub’s riffs cover all the bases and then some; eerie long open chords with added dissonance, groovy palm muted parts and even some melodic bits here and there. Now, Michał’s bass is so concentrated and impenetrable. It is amazing how vital is his playing for the band since his bass parts add a lot of character to the guitar riffs. Last but not least, it is well known that playing slow for a drummer can be a deal breaker. Well, in this case Thot shows how to keep things tight and solid but also knowing when to add dynamics and interesting fills. Overall, “Abyssal Menace” is one hell of a Death / Doom album that, besides the obvious influences, sounds different from a lot of copycats out there and, best of all, has its own identity. You can contact the band at www.facebook.com/haunted-cenotaph-150906512232754 and get their album from www.facebook.com/fallentemple666