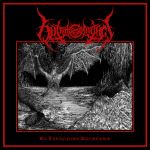 HEPATOMANCY is a small Black Metal band hailing from northern Italy. Be forewarned, this album is not for those of you who want bands to reinvent the wheel of how Black Metal should sound. HEPATOMANCY carried the sound of the early 90s into the new millennium. This is Black Metal, period. On “De Tyrannide Daemonum” you can hear a lot of straightforward tremolo picking on the guitars and furious blast beats on the drums remembering of early GORGOROTH. However there are also some mid-tempo parts with memorable riffing in which nice melodies are added to the overall rawness. These parts seem to resemble EMPERORS’s early efforts and fit nicely into HEPATOMANCY’s musical concept. The vocals remind of Hat and Nattefrost, a bit more screamed though. HEPATOMANCY defend the throne of evil and it is great to see that their first album kicks in like bomb. This is great Black Metal for the purist among you. www.facebook.com/utsogp, www.facebook.com/narbentage