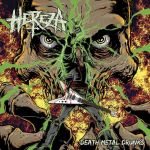 Croatian Death Metal machine HEREZA (who relocated to Germany a few years ago), has released “Death Metal Drunks”, their third album, via Gods Of War Productions. These guys have built a pretty good name in the underground so far, since their previous albums were solid, although they still needed a little work, in my humble opinion. Well, I had my expectations with “Death Metal Drunks” and after a bunch of spins, the album does not disappointed me at all. The production is razor sharp and the mix lets every instrument shine. Their brand of thrashing Death Metal is heavy and dynamic, full of nuances and details. There are numerous elements that took me back some 20+ years in terms of songwriting and structuring too. I may say this album leans a bit more towards the Thrash Metal side, which adds a lot of character to the obvious Death Metal base. So yeah, what we’ve got here is a great album from a band that has proven to be a force to be reckoned with. Instrument wise, guest drummer Conny Pettersson’s (ANATA, ex – EVOCATION) work is amazing. He is always going around his kit like crazy with a bunch of excellent fills and beats, yet his drumming is steady and controlled when the songs require him to be. Slobodan Stupar, co-founder, has handled guitars and bass throughout the years, so his performance and riffing is what gives HEREZA their style. And most of these songs never stop thrashing around. I mean, there are riffs that instantly reminded me of early METALLICA and / or DEATH ANGEL stuff, played with a lot of conviction, heaviness and more distortion. And finally, there’s Ivan Kovačević Kova, co-founder of the band, who provides a high octane vocal performance. His range goes from Thrash Metal yells (thankfully no high, ear piercing screams) to Death Metal grunting and everything in between. Something that I really liked is that he manages to adapt his vocals following the songs’ dynamics because it works perfectly. “Death Metal Drunks” is an album that will have you headbanging for 28 minutes. Yeah I know, there are EPs that are longer than that. But those 28 minutes are filled with wild, heavy, neck-breaking Death / Thrash Metal. And I am sure that once the album is finished, you’ll go ahead and do exactly what I did 3 times in a row: push the “repeat all” button, cause this album deserves a lot more than just one listen. All the songs are great but the highlights for me were: ‘Death Metal Drunks’, ‘Dullahan’ and ‘Stupid Spoiled Whore’. Go ahead and show these guys some well deserved support here: www.facebook.com/herezametalband. And go get their album NOW from their label here: www.godzovwar.com