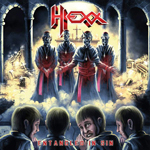 They started as a Power / Speed Metal band, released a couple of decent albums in that style in the late 80s, then they turned into some kind of technical Death / Thrash and released some EPs and a full length in 1991. Although good, the music itself was nothing that will pass the test of time. Then silence. Big silence. Then it was the revival of old Metal bands from the USA and somewhat there were some people remembering them from their first two albums. So, they reformed and released a new album in 2017 with two original members, including a new vocalist. And now in this year of decay 2020, they have released a new album. What is the style? Well, it is not that far away from their more thrashing style, yet has a big reference to their first two albums. Power / Heavy / Thrash yes. The musicianship is obviously first level. The production is heavy and powerful. The vocalist seems to be an acquired taste, he is raspy yet melodic, but as a matter of fact he adapts to what the songs needs. The style is near that one of ICED EARTH, METALLICA and EXODUS in their 90s approach. At the end, this new album shows that they are more on the Thrash side rather than their more Power / Heavy Metal, and actually they are doing it quite good. As a matter of fact, I must say that when they were more Death Metal, I always felt something was missing and sounded a bit forced. When they were more Heavy / Power they did not really catch my attention, although they had some good songs here and there. So, in this case, they have taken some bits here and there and done an album that is very good. Included are some re-recorded versions of their 1984 debut album, and they do sound quite good, yet you can feel they were more traditional Metal there. To me in all honesty this is the best form of the band, and hopefully they can continue doing it. www.facebook.com/officialhexx, www.hrrecords.de