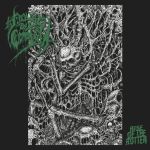 HOUSE BY THE CEMETARY
Rise Of The Rotten
(Pulverised Records)
30:17min

And another band with Rogga Johansson. I mean, how the hell does he remember all those songs? Don’t you think he might end up playing one of the other million bands and still no one notices? Ok, this band is also formed by BLODSRIT (Black Metal) drummer and American vocalist for MONSTROSITY with a title that reminds me of MORTICIAN. Ok, no matter what, this is very enjoyable old school Swedish Death Metal, which I will say, sounds a lot like early DISMEMBER with bits of CARNAGE, and even some Black Betal touches here and there to spice it up. And believe me, it is just damn good. The vocalist does a very good job at having some Matti Karki style, and of corpse some LG Petrov (may the man rest in festering slime and Death Metal forever! Legend!) Oh, and in this album, Rogga has maybe the sweetest HM10 guitar sound I have heard in quite a long time. Crunchy and full, and yet everything can be sorted out, every damn riff, every rotten riff. To be honest, most of Roggas’s work is good, but tends to sound very similar. Well, in here, he makes things his own, borrowing everything from the golden days of Swedish Death Metal and giving it a whole new life. The album cover also reeks of old school as if this was supposed to be a demo with xeroxed covers and home-dubbed tapes. As of today, and the hundreds of bands of this master of guitar, without a doubt my fave from him. A killer album. www.facebook.com/pulverisedrecords

Julián “The Wretched One” Núñez

Julián "The Wretched One" Núñez