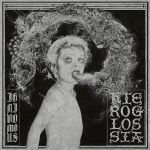 When your band name means “vomiting fire”, you know you’re onto something. Australia’s IGNIVOMOUS have been around long enough to master spewing their lava all over the place. Nope, that doesn’t sound right, but does it really have to? Since 2006, the band’s only released three studio albums, the most recent being “Hieroglossia”, a murky, swirling, gutteral album of filth and pure Metal glory. From the moment you hear the throat-ripping “ohhurrrrrrrrrrrrr” in the opening title track, you can tell the band means fucking business. The guitars envelope the atmosphere as the drums change their rhythm like most Metal bands change members. ‘Circle Of Scythes’ is sort of a mess in its musicianship, but in a good way. This is Metal at its primitive best, which, in all honesty, Metal should be. I mean, true Metal shouldn’t really be all glossy and pretty, right? IGNIVOMOUS punch that shit in the throat and deliver their own style of rebellion. ‘Cloaked In Resplendent Perdition’ is a thunderous, fast-paced track going hand in clawed hand along with ‘Thalassophobia’, a blindingly filthy track that sort of makes you want to shower afterwards. The fifth track ‘Shackles Of The Demiurge’ plods along as the album slows down to a crawl, just to change things up a little while still maintaining the vibe, until it erupts into destructive Death Metal obliteration. ‘Blood And Mercury’ is a dungeon Metal conquering track as ‘Gaunt Redemption Parasite’ is a doom-laden devouring of souls. ‘Vitriolic Swarm’ sounds like its title… an army of deadly insects cascading and attacking us in a sonic fury that rivals the best of the genre. IGNIVOMOUS are a band to be reckoned with. They’re pretty much flipping off the super-produced Metal albums in lieu of their own hideous deformity of an album, that lumbers into your consciousness and stays there, growing, spreading and ultimately annihilating us till we’re a rotten husk of flesh and sinew. But in a damn good way… For more info, check out www.facebook.com/ignivomous, www.facebook.com/memento.mori.label