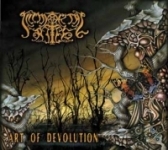 Not bad… not bad at all! On their debut album, IMMORTAL RITES from Germany deliver some high class melodic Death Metal that successfully avoids the Gothenburg cliché! The CD was recorded as a demo at Mastersound Studio by ATROCITY’s Alexander Krull in winter 2002 / 2003 already and both Mr Krull as well as Liv Kristine Espenaes (ex – THEATRE OF TRAGEDY) contributed some melodic guest vocals. Especially the song with Liv Kristine’s vocals, namely ‘Mirror Refletions’ has quite some underground hit qualities. The album is pretty mid-paced but at times the band gives some blasts of similar intensity as GOD DETHRONED, for example. IMMORTAL RITES can’t completely stay away from the Gothenburg sound as some of the guitar harmonies are too close to that style but the overall impression is: they’re definitely not from Sweden and they come up with some really strong compositions – so everybody into IN FLAMES or AMON AMARTH: check out “Art Of Devolution” in case you’re interested in something fresh and (kind of) new! www.immortalrites.de