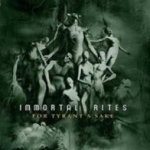 For the name I was expecting a Morbid Angel style brutal Death Metal band or an evil Black Metal sound. But no, this second effort from this German band is quite different. Originally the album was going to be named "Source Code @ Converter’s Day" but was changed for "For Tyrant’s Sake", cause it sounds darker. Ok, to the music, it can be named Death Metal in a way. In fact it does sound, and a lot like AMON AMARTH in many ways. I mean when the band plays at mid-tempo it sounds like a copy of the Swedes, it is quite weird. Even the vocals are like those of Johan Hegg. The difference could be noticed by some more normal sung parts, which reminded me of SUPURATION from France, some to OPETH and also the first ARCTURUS album. The music maintains quite melodic, with a good production, although for my tastes it just needed a brighter end to sound more powerful. A thing they need to really use more is faster parts, like in the songs that gives title to the disc, one of the best songs in here. Because when they play mid tempo, sometimes it sounds quite similar between songs. Although for their lyrics they won’t fall in the Viking Metal category, I am sure fans of bands labeled like that will surely be pleased with this release. In the end it sounded to me like a mixture of later DEATH and the aforementioned AMON AMARTH although less technical and less intense. A bunch of fine musicians doing some good Metal music, although sometimes low on brutality, they keep the epic parts high. It is the kind of band that I am interested in listening to some more material in the future to find out how they develop, as there is future ahead. www.medusarecords.net