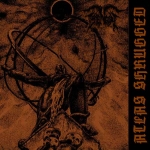 After years of mediocre releases (the second half of the 90s – with the exception of some great bands like BEWITCHED, DOMINUS XUL and TOTTEN KORPS among others), the Chilean scene finally got back its status of the late 80s / early 90s, with bands like UNAUSSPRECHLICHEN KULTEN (Hi Curwen and Butcher), THORNAFIRE, MELEKTHAUS, DIABOLICAL MESSIAH, etc. This new decade the Chilean scene has improved in the right way, with tons of high quality offerings, professional acts, etc. Acts like DEMONIC RAGE, PUTRID EVOCATION, ISTENGOAT, INVINCIBLE FORCE among others have shown the world the southernmost savagery of extreme Metal. Now it’s time to focus on ISTENGOAT, a four piece act that impressed us, in a good way, with their "MMXII Promo" release (also on Apocalyptic Productions and longtime sold out) with their brutal Death Metal. But time has passed, and they have delivered some of the finest and most brutal releases the Chilean scene has faced in years. 8 hymns of mid paced Death Metal in the American tradition, but not as copycats, because we can find elements of their own harvest, touches of traditional Chilean old school Death Metal, mainly focused on TOTTEN KORPS and DOMINUS XUL. No surprise, the band features former members of this legendary act. Guttural vocals à la John McEntee and Ross Dolan, the band has also added some experimental touches, but not leaving its brutal trademark, what enhances this opus. Everything is blessed with a powerful and clear production courtesy of Lord Warisnake and Etagord Studios. Other influences the band has accurately managed to incorporate in their style are bands like ANGELCORPSE, (old) MORBID ANGEL, (early) VADER and (early) DEICIDE. With this release ISTENGOAT has demostrated that they’re ready to conquer the world and take it into darkness. Hope to see this release on vinyl format soon, they deserve it. Contact: www.istengoat.co.nr, www.facebook.com/apocalyptic.zineprods