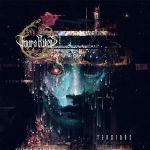 Not even two years after the French JOURS PÂLES presented their debut album “Éclosion”, they are already back with a second album. “Tensions” continues the way JOURS PÂLES took on their first offering, which means we have another fine and rather relaxing Post Black Metal album with a slightly avantgardistic and experimental character. An album that picks up the spirit of bands like ALCEST. With good reason, JOURS PÂLES can be classified as Blackgaze. Again we find some influences from Post Punk and this time especially from early Emo Hardcore like DAG NASTY, which is not the worst idea. The gloominess of the songs fits great with these ideas and melodies. Thus the “certain beauty” that I found on “Éclosion” is even more present on “Tensions”. And with songs like the catchy and powerful opener ‘Jour De Pluie, Jour De Fête’ or the quite traditional and raging ‘Ecumante De Rage’, JOURS PÂLES have some real aces up their sleeve. The same goes for ‘Saturnienne Lassitude’, a dark yet melodic slower tune, or the very diversified and moody ‘Hâve’. ‘Ode À La Vie (Chanson Pour Aldérica)’ is a real quiet tune, touching DEAD CAN DANCE, while ‘Dose(s)’ is the most traditional song on “Tensions”. In the end, JOURS PÂLES present ‘Les Feuilles Tombent’, a song between Progressive and Epic Black Metal that is another highlight on an album that is not short of highlights. In case you dig some less raging, yet dark and atmospheric music, “Tensions” could be a good choice. For more information please visit the band at www.facebook.com/jourspales or the label at www.facebook.com/ladloproductions