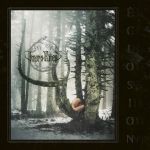 With JOURS PÂLES, we once again have an example for the blooming French (Post) Black Metal scene that is presented by the very busy Les Acteurs De L’Ombre Productions. This band is a very new project from AORLHAC singer Spellbound and born of the ashes of ASPHODÈLE, named after their only album from 2019. Musically, JOURS PÂLES differs a lot from AORLHAC, which isn’t that unexpected. The songs on “Éclosion” are rooted in the experimental and avantgardistic spirit of bands like ALCEST. Thus JOURS PÂLES can be filed under the genre Blackgaze for sure. The songs on “Éclosion” are mostly gloomy and tend to be a little depressive, yet they capture a certain beauty. Influences from Post-Punk and other non metallic genres are the rule rather than the exception. Just listen to the intro piece of the title track that reminded me of MARILLION or ‘Eclamé’ with its female vocals in the vein of DEAD CAN DANCE. Over all, JOURS PÂLES use the ideas and themes of Black Metal only very rarely and in a kind of effective dose like in ‘Ma Dysthymie, Sa Vastitude’ or ‘Éclosion’. The result is an album that fits for the moments you need some quiet music to relax and settle down for a bit. And songs like the catchy ‘Le Chant Du Cygne’ or the final instrumental ‘C2H6O’ (which is the chemical formula of Ethanol, by the way) are a good choice to do so. If you need to slow down every once in a while and dig stuff like ALCEST, “Éclosion” might be a good choice. Visit JOURS PÂLES at www.facebook.com/jourspales or their record company at www.facebook.com/ladloproductions