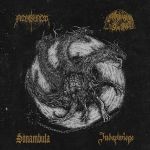 Four Spanish bands have teamed up to create this bastard of a split album, showcasing darkness and evil in different forms and soundscapes. JUDASWIEGE is starting the party with four tracks of dark medieval Black Metal painted by Scandinavian Black Metal with a dark and chaotic twist to it. Together with a little fondness of EMPEROR I reckon, just take the main riff in ‘The Pit And Pendulum’ which is a high speed version of the main riff in ‘The Loss And Curse Of Reverence’. The duo is doing ok, not the most original Black Metal and the programmed drums become a tad dull as the tracks rumbles along, though solid, not that original riffing and dark ambience. Next up is MORIBUNDO, a band that delivers dark and doomy soundscapes, topped with a guttural growl and theatrical effects. The band is quite good at painting up a dark atmosphere, and the keys and female choirs do also work quite well, though I miss a bridge between the doomy darkness and the gradiose parts. It is like the music lacks a hook or two, though with some work I think it can turn out quite well. SÖNAMBULA delivers heavy and dark Death Metal with doomy bits in the mix. A dark churning progression of dark and twisted guitar riffs, twisted growls and screams, which creates an eerie and unpleasant atmosphere, which actually works quite well. The production is thick and thunderous, modern Death Metal with a nostalgic feel and delivery, quite straight forward with a few unexpected twists and turns, SÖNAMBULA is actually doing it quite good. Last up is BARBARIAN SWORDS, a band that is delivering a strange old mix of Black Metal and droning shenanigangs. Slow and and dragging cold riffing, a pace that is quite doomy in its build up, though not quite dark and heavy in its atmosphere, and a grim whispering rasp that spews forth the lyrics. Quite strange, though also quite drawing. A split album that gives us four quite new Spanish bands and a dark and eerie atmospheric mix of especially Death, Black and Doom Metal. Some more interesting than other, which is quite natural on such releases. Not a ‘to die for’ split, though who knows, one or two of the bands might become the flavour of next year, do you dare to miss out? More band info at: www.facebook.com/judaswiege666, www.facebook.com/moribundometal, www.facebook.com/sonambulaofficial, www.facebook.com/barbarianswordsmetal, label contact: www.paura.cat