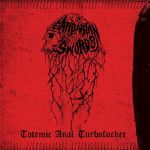 The band name BARBARIAN SWORDS would make it seem the band is some sort of Viking, Power or Battle Metal. I mean, why wouldn’t they be? But nothing is further from the truth. The band from Spain actually creates a Black Metal sound. And with an album title such as “Totemic Anal Turbofucker”, you just know they won’t be clean-singing about ships and plunder. Unfortunately, the band name may confuse newcomers into thinking they’re something that they’re not. However, musically, BARBARIAN SWORDS delivers an aggressive, chaotic onslaught of screeching fury. After the intro ‘Dios Te Salve’, ‘How To Destroy Christianism’ (Christianism?) is a fucking super-speed, in-your-face track with throat-mutilating vocals, lightning-fast guitars and thunderous, rapid drums. ‘Fleshy Battering Ram’ is another energetic song that’ll laugh at your sorry ass if you don’t stand up and destroy things. Marching boots open up ‘Be The War’ which again rips our spine out of our back with its intensity. ‘Jesus The Pederast’ and ‘Pig Crap Shitty Christ’ (what a fucking excellent title!) are more blood-drenching demolishers until ‘Cerebros Destruidos (Eskorbuto)’ levels things out a bit before the album ends with ‘Totemic Anal Turbofucker’ in a drum-fueled, pounding rhythm before erupting like an orgasmic volcano of fiery demon-sperm. I’ll admit… This album caught me off-guard. I was caught in a whirlwind of vertigo as the band’s sound kicked me in the face, erasing all thoughts of Battle Metal from my feeble mind. If you want pure adrenalin in your Metal, give this a listen. For more info, check out www.facebook.com/barbarianswordsmetal, www.facebook.com/3rdirex