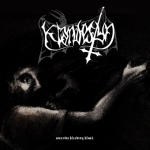 This album was already released four years ago in 2009 and I have no clue why it took so long to contact Voices From The Darkside for a review. But do not worry, you have missed – nothing. The best thing about the band is the nicely drawn band-logo, but that’s it. My first thought was that I am no longer a Black Metal fan, especially since the last years no genuine Black Metal release could convince me, except for “Serpent Sermon” by MARDUK. But then my second thought was, that is not correct, I still like listening to Black Metal, especially the early / mid ’90s Scandinavian style. And therefore I must say I have heard music like “Wound Bleeding Black” countless times before. KLANDESTYN are just a simple GORGOROTH (first three albums) clone. 20 years ago this debut by the Russian based band could have possibly aroused some uproar, but in 2013 it is just boring. Ok, there are some nice moments during songs like ‘Black Mantra’ or ‘Hell Of Endless Thoughts’, but that is all and not enough for nearly one hour playing-time. Everyone can record and publish the music one likes, but do I have to listen to this? No. Do you? www.myspace.com/klandestyn, www.assault-crew.net