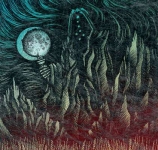 The scene in Russia still seems to be huge and vast, especially when it comes to Black Metal. So many bands that no one in the Western world hardly ever heard of – to get a little insight, what better opportunity can there be if not a compilation? Well, in the case of “Harvest: Bloody Harvest”, it is somewhere in between a multi-split and a compilation, five EPs (that aren’t available separately) compiled to a double CD, packaged in an A5 digibook with a 12 pages booklet, limited to 111 copies. So, it’s an optical joy. But a musical one as well? The first band that’s presented here is KLANDESTYN from the city of Vladimir that just offer one song, ‘Night Ov Bloody Harvest’. But this is a long one that starts promising, but in the long run of more than 16 minutes doesn’t keep these promises, since it lacks of forcing ideas. File them under: Black Metal with bubble gum qualities. Next we have four songs from NEBELWERFER, who originally come out of the great wide open of Siberia, but relocated to Saint Petersburg. They present us rather rough Black Metal, that’s pretty much to the point, yet the high speed is overall too dominating to me. But with their final song ‘T.S.K.’, NEBELWERFER provides the first highlight on “Harvest: Bloody Harvest”, thanks to the unusual break. ULVDALIR are from Saint Petersburg either and present two songs here. ‘World Without End’ is rather long and tries to be diversified, yet this one has too few tension to be really captivating. But ‘666’ is a lot better, since ULVDALIR get to the heart of their a little more complex Black Metal here. So, the first of two discs is pretty mediocre. Let’s hope for more on the second disc that opens up with five songs from RUIN. These guys are from Voronezh and come along very raw and unpolished in their production. Yet this sound fits good to their rough stuff, that reminds of older Black Metal acts and in some moments hints on pre – Death Metal extremists like Danish SAMHAIN (‘Fence’) or CELTIC FROST (‘Spiny Hug’). This mix really works out damn well and thus makes RUIN the absolute winners on “Harvest: Bloody Harvest”. The last band here is from Saint Petersburg again. MOR start off with ‘Halls Of Oblivion’ which is either a too long (seven minutes!) intro or just boring synthesizer shit – decide for yourself. With ‘Flame Of My Soul… Eis’, they prove that they can play music as well. Yet, their progressive Black Metal doesn’t really work out, since it sounds somehow random, not really worked out. Even though their last track ‘An Iron Avantgarde’ comes along more focused with its Thrash Metal foundation, it doesn’t really convince me either, for there are no really noticeable ideas or parts. So, in conclusion, there’s one fine band with RUIN, NEBELWERFER aren’t that bad and ULVDALIR at least have one fine song, while the other two bands are really negligible. If that’s a good argument to check out the Black Metal scene in Russia a little more? Well, at least RUIN are a band to keep in mind. Check: www.assault-crew.net, www.assavlt.bandcamp.com