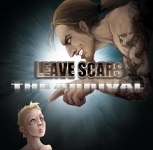 It’s actually pretty amazing how long this worldwide Thrash Metal boom may last. Thousands of Thrash Metal bands have been popping up like out of nowhere within these past 4 or 5 years or so – and there’s no end in sight for this ‘trend’. Well, who could really complain if you are a fan of this genre. One thing is certain already: I won’t. LEAVE SCARS (originally started under the name D.O.A.), this young Belgian Thrash Metal act, has been around for about 8 years thus far, and even winning the Wacken Open Air Metal Battle Belgium in 2009. That’s an achievement in its own right but even a better and more important achievement from this group must be getting their debut studio album out, called "The Arrival". The production really isn’t the most professional on the disc you can find out there (more like on a demo level, sort of) but LEAVE SCARS’ pretty darn vicious and somewhat technical Thrash Metal surely makes up for the lack of pro quality studio sound. Old school Thrash this is not-so-surprisingly too, leaning toward more American sounding Thrash Metal (à la FORBIDDEN) than early German Thrash Metal sound, I guess. There’s enough the needed punch within the band’s overall fast-tinged songs, some good tempo changes and solo outbursts, although in the very same breath it also could be hoped that vocalist Dizzy could probably throw in a few spine-chilling screams every now and then, just to give a wake-up call for listeners about his vicious means to be one of your new favorite Thrash Metal vocalists around in 2013. In the end of the day, "The Arrival" turns out to be a decent release from LEAVE SCARS all in all. Where did they take the band name LEAVE SCARS from, try to give me your wildest guess. More about these Belgian Thrashers at www.facebook.com/leave.scars