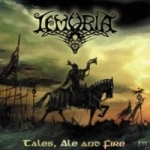 The two great compilation albums “Face Your Underground” (vol. 1 and vol. 2) should already be proof enough of the big potential of Belgium’s current underground scene. But as those albums got compiled by the DeathMetal.be guys, their main focus were of course the Death Metal hordes of our country neighbours, more or less leaving out the more obscure acts that are still striving for originality overthere. LEMURIA definitely is one of those acts worth getting a bigger attention. They started out in 1999 as SPINAL CHILL, back then still being a rather primitive Death Metal act themselves, put out one demo (“Demonic”) and a couple of line-up changes later decided to rename the band into LEMURIA. Ever since that they have musically changed quite drastically… A new demo CD (“The Vault Of The Witness”) saw the light of day in 2002 and nowadays they come up with something what they call “Black Heavy Metal with folky riffs”… Basically a very well fitting description, yet not really capable of revealing the real talent of this six-piece in the best possible way. There’s so much more to their debut full length “Tales, Ale And Fire”, that it’s actually really hard to put that into words in a short review here. So, whatever I come up with should only be seen as a desperate try, to portrait a rough imagery of the band’s big musical variety. Symphonic aspects and beautiful moody keyboard soundscapes all of a sudden get replaced by almost FINNTROLL-like, happy sounding Folk elements… All this gets incorporated in an overall very rough, yet melodic “Viking” Metal style with various different vocal styles on top of it (from a very grim, almost Black Metal-ish voice to a raw deep one)… I even dedected some similarities to classic AMORPHIS (ca. “The Karelian Isthmus” / “Tales From The Thousand Lakes” period)… An impressive production (remember that this a a self financed release!) and the totally fitting cover artwork / logo courtesy of Mr. Kris Verwimp complete the professional picture… So, all in all LEMURIA have delivered a highly impressive album, destined to be picked up by a bigger label in the not too distant future (you can quote me on that!). Sound samples of three of the album’s songs are available at the band’s also very cool styled website www.lemuria.be, so make sure to check them out.