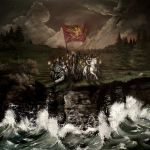 LES CHANTS DE NIHIL’s “Le Tyran Et L’Esthète” is the fifth full length by the French Black Metal band and their first outing with Les Acteurs De L’Ombre Productions. This is an epic concept album. You can see the album is divided across IV Acts and each act is defining an inherent timeline in the storyline. What the band has managed to do is raise themselves and make it beyond music. The entire writing has been centered around a narrative that the band successfully builds in your mind. It’s a story that’s playing out in front of your eyes. Sonically, this is Operatic Black Metal engulfed in the spirit of Death Metal. The drums are pummeled constantly, the bass stands on its own in the lattice of darkness. The guitars add the necessary depth to showcase the shift of the story. Special shout out to the choir parts, they’re just fantastic! Otherwise the vocals don’t meander or lose focus. On the whole the musicianship is quite commendable on this album. To top it all LES CHANTS DE NIHIL manages to mix their individuality brilliantly and don’t let it overpower the message. Theoretically this a cloud of atmosphere that is slowly filling your lungs. There is no respite but for the calm moments which are few and far between on this record. No, this isn’t the first Operatic / Symphonic Metal record to hit the earth, however the way the band manages to juxtapose the message with the burden of the said message and the furiousness is quite something. I couldn’t quite keep track of the time when I heard the album. It’s 52 minutes long, but I’m not sure if this is an album to go start to finish in one sitting. I did not at the least. All said and done what LES CHANTS DE NIHIL have managed to do here is stunning. They’ve managed to weave a narrative with atmosphere and drama. Very rarely does an artist aiming to tackle that combination manage to come out unscathed and LES CHANTS DE NIHIL have ticked all the right boxes here. They’ve not only produced an opera we could clearly use this year, they’ve also managed to inject some well intended spirit in the overall structure. I’m hoping this will be a veritable treat for all Metal fans. Fans of Atmospheric and Operatic Black / Death Metal should definitely listen to this record as soon as possible. Recommended! For more information, please visit: www.facebook.com/leschantsdenihil, www.facebook.com/ladloproductions