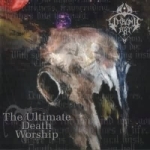 Just like the majority of their Black Metal countrymen, Norway’s LIMBONIC ART musically also evolved more and more into the heavy Death Metal direction throughout the last couple of years. While on their early releases the atmospheric keyboards were still omnipresent and very much upfront in the mix, the band had undergone a drastic change and went for a slightly heavier approach with their newer creations. As a result, the production on "The Ultimate Death Worship" (the title says it all…) is way more powerful, guitar dominated and keyboards only get used to fill in certain parts of the songs or to create a specific atmosphere in the background. If it wouldn’t be such a bad timing (everyone’s switching from Black to Death at the moment), not really a bad decision as LIMBONIC ART’s material sounds a lot more matured and crushing because of that. They mostly still stick to pretty long tunes though and luckily have also remained true to their "black" approach in the fast parts as well as in the always great vocal delivery (one of the tracks even features a guest appearance of Attila Csihar – TORMENTOR, MAYHEM etc.), while the slower, technical riffing partly has a big MORBID ANGEL feel to it. Somehow it’s kinda weird – while I really admired the atmospheric / symphonic parts on their older albums (which even ended up becoming a big LIMBONIC ART trademark), the keyboards we get to hear in the new tracks often sound pretty cheesy (same goes for the programmed drumming, which they really should get rid off pretty quickly). But all in all this release has still enough potential to live up to the high expectations we all have in LIMBONIC ART, and if you listen really carefully "The Ultimate Death Worship" is nothing but the logical follow up to the band’s 1999 full length "Ad Noctum / Dynasty Of Death" (which already came across quite similar sounding). Oh, and for all you die hards out there – the vinyl version once again features a bonus track (‘Voyage Of The Damned’).