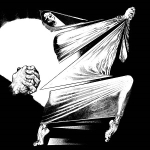 LOCUST LEAVES’ debut album, “A Subtler Kind Of Light”, is a challenging mountain of progressive Metal, ambient textures, and unorthodox composition. Comprised of four long songs, the Greek duo’s newest album plays out with a bookish narrative, each song unfolding a new segment of a story. Theatrical at times, atmospherically similar to early ARCTURUS or UNEXPECT, “A Subtler Kind Of Light” is a sincere – and successful – foray into a story-telling style of progressive Metal. Opening with ‘Light (Fos)’, LOCUST LEAVES display an NWOBHM – flavored flurry of melodic riffs. The track moves from phrase to phrase on the back of this melodic riffing, possessing a natural and free moving flow, while keyboard accents and a myriad of vocal styles ride on top of it. Archon Vorskaath (AGATUS, ZEMIAL) served as session drummer with Ayloss (SPECTRAL LORE) contributing lead work as well, both musicians giving noteworthy performances on this release. At times, ‘Light (Fos)’ shifts into both slower, more atmospheric parts and faster, Thrash – style segments. These changes are typically short lived, falling in line with the anthropomorphic nature of the song. ‘Pillar (Vraxos)’ has writing reminiscent to late 1990’s DEATH, a bit more progressive however and not quite as straightforward. Being that ‘Pillar (Vraxos)’ is more of a “continuation” of the album, as opposed to a new song altogether, it thematically follows what ‘Light (Fos)’ started. Being slower than the opening track, LOCUST LEAVES fills the negative space with combinations of fast melodies and atonal shifts and fills. Clean vocals from Nick K. brings a shock of energy to the song. ‘Fall (Ptosi)’ and ‘Flight (Ptisi)’ resolve “A Subtler Kind Of Light”. ‘Fall (Ptosi)’ enters with a single piano track before moving into a doom – like first half. The song resolves into a Thrash breakdown before entering ‘Flight (Ptisi)’, which is an ambient instrumental. The production on “A Subtler Kind Of Light” is adequate and fitting for the expansive palette of sounds on display by LOCUST LEAVES. The melodic interaction between the guitars means there is no thick distortion clouding the sound and the production on the drums would be fitting for a Rock, or even a Jazz, record. Vocals are front and center. Ambient textural sounds play about in the background on most tracks, helping to elevate the personality of the music. “A Subtler Kind Of Light” is a solid debut for the Greek duo. The experimental leanings on the record are well executed and thought out, giving the album a sense of accessibility. While never reaching a crushing level of heaviness, the more NWOBHM and Speed Metal approach to riffing is more for continuing a narrative as opposed to beating the listener into a coma with brutal riff after brutal riff. Archon Vorskaath’s drumming was a nice addition to “A Subtler Kind Of Light” and the lead work is sharp and precise. LOCUST LEAVES’ debut album is nice supplement to the progressive Metal styling of UNEXPECT, the more experimental days of SIGH, or even the theatrical presence of later STRAPPING YOUNG LAD. For more information on LOCUST LEAVES, check out www.locustleaves.com. I, Voidhanger Records can be reached at www.i-voidhanger.com.